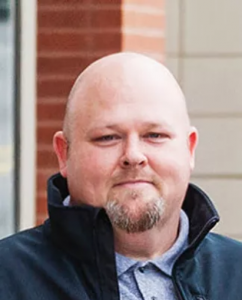 Joshua Sheetz is originally from Tennessee but has now lived in the Jacksonville area for over 20 years. In 2002, he graduated from the University of North Florida with a degree in English and a minor in History. He also has a master’s degree from Arkansas State University in Educational Leadership. In 2006, he left the corporate world to pursue a teaching career at EVA. After joining EVA, he taught upper school English for four years until he became the Academic Advisor in 2010. In 2015, he became the school principal and served in that role until the summer of 2020 when he was chosen by the board of directors to be the school administrator.  Joshua is passionate about strengthening the academic standing of the school while preserving the Christ-centered relationships that make EVA a warm and inviting family.

Joshua has three children. The two youngest currently attend EVA, and the oldest graduated from EVA in 2019. When not at the school, Joshua enjoys reading, traveling, and serving in his local church. 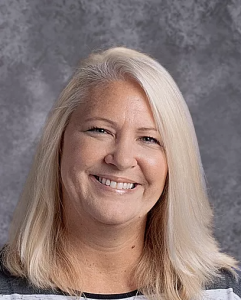 Born and raised in Jacksonville, Mrs. Hall has been in the field of Education for over 31 years. She graduated from Ed White High School and continued her education at Flagler College. While there, she earned degrees in Elementary Education and Specific Learning Disabilities, as well as a minor in Business Administration. She is currently pursuing her master’s degree in Educational Leadership through Bob Jones University. Mrs. Hall is embarking on her 15th year at EVA and is excited to fulfill her new role as Principal. She considers it a privilege and an honor to be part of the ministry of Eagle’s View Academy and is looking forward to continuing to share her love for the school and education with all the incredible families and awesome staff who are a part of the EVA community.

Mrs. Hall has been happily married to her college sweetheart, Steve, for over 32 years. They have four children, all of whom graduated from Eagle’s View Academy. She is passionate about following Jesus, her family, animals, supporting teachers, and equipping students with the tools they need to pursue their dreams. 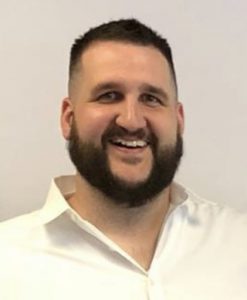 Coach Shank was born and raised in Jacksonville and attended Trinity Baptist College after high school. In 2012, he received a degree in Secondary Education and a minor in Sports Administration. While at Trinity he played four years of basketball where he was a four-time All-American. Upon graduating, he was hired on staff to be an assistant coach with the TBC men’s team. In 2014, he was named Athletic Director at Cornerstone Christian School where he had the privilege of starting and establishing the athletic program. In 2017, he and his wife moved to Raleigh, NC where he was the Athletic Director and Head Coach of boys and girls basketball at Neuse Christian Academy. In 2022, Zach and his family moved back to the Jacksonville area and accepted the position of Athletic Director at EVA. Zach is passionate about athletics and making sure that EVA competes and wins with character and integrity.

Coach Shank has been married to his wife, Emily, for 7 years and they have a 2 year old daughter named Lennon. When not at school or in the athletic setting, Zach loves spending time with his family and enjoying the beach. 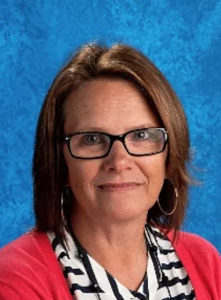 Marian has been involved with EVA from the very beginning, being a part of the original home school group that started the school.  Prior to working at EVA, she worked as a Buyer’s Assistant at Learner’s Warehouse and as a Cash Manager at Stein Mart.  Marian has two daughters and four grandchildren.  Marian’s youngest daughter graduated from EVA in 2005.

Marian loves spending time with her family, bike riding, going to the beach, and vacationing at Disney.  Her goal is to help EVA continue to raise academic standards while maintaining a Christ-centered environment in the classroom.  Marian’s desire is to be a positive leader in growing the school financially so that it can build for the future. 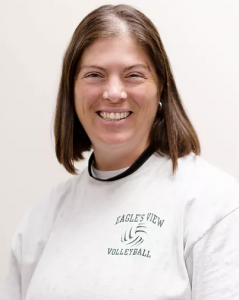 Catherine Rottmann, a native of Jacksonville, is an educator and mentor. She began her teaching and coaching career at Eagle’s View 10 years ago before moving on to University Christian School. At UC, Catherine taught Math and physical education while coaching softball, volleyball, basketball and soccer. Now that she has returned to EVA, Catherine brings a passion for mentoring and inspiring students academically, athletically, spiritually and morally. She has a Bachelor’s Degree in Sports Leadership from the University of North Florida. Catherine is married and has a 2 year old son, Kipton, who is her pride and joy.